With the finals approaching our teams it’s time for some tennis tips, mainly aimed at juniors but probably worthwhile for all players to take note. 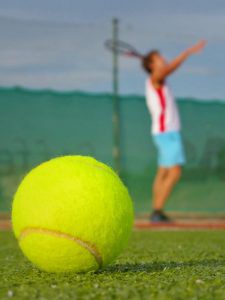 When hitting up against your opponent start to get a gauge on their strengths and weaknesses. Do they have a stronger forehand or backhand, are they a competent volleyer?

If it’s too early to gauge keep it in mind for when your match starts and try and get an idea as the match unfolds. As you start playing keep a watch on how well they move around the court, can you exploit slow movement or do they chase everything down?

Sometimes your opponent won’t have a weakness which simply means you’re in for a tough match, but as a general rule of thumb at this level backhands are the weakest shot, so target it! without compromising the way you play try and work the ball to your opponents backhand side.

Serving can be like a yo-yo, first serves might be fast, second serve might get tapped over the net, remember to adjust your position on the court to receive each serve

All of the above still applies. Talk to your partner and establish a weakness for each player and who the weaker opponent is, and if the opportunity arises target the weaker player, or the weakness of each player.

These are not golden rules to play by they are just tips to keep in the back of your mind,hopefully it gives you an edge over your opponent.

Thanks to Terry F Meehan (St. Francis Tennis Club) for letting me use his team’s pep talk.

From beginners to advanced players aged four to eighty-four, Topline Tennis can help improve your ga...

The courts are often available for member use. Why not come down and have a hit?...

Want to try tennis without membership, or you’re a non-junior member and don’t have a co...

Do you want to get some tennis practice and can’t find a partner, or do you need to practice your do...

Support Research Tennis Club and purchase your Entertainment Membership from us...

CARDIO TENNIS +ADULT LESSONS Whether you have past tennis experience, curre...

Another year has passed and financially the club is in a good position to procee...